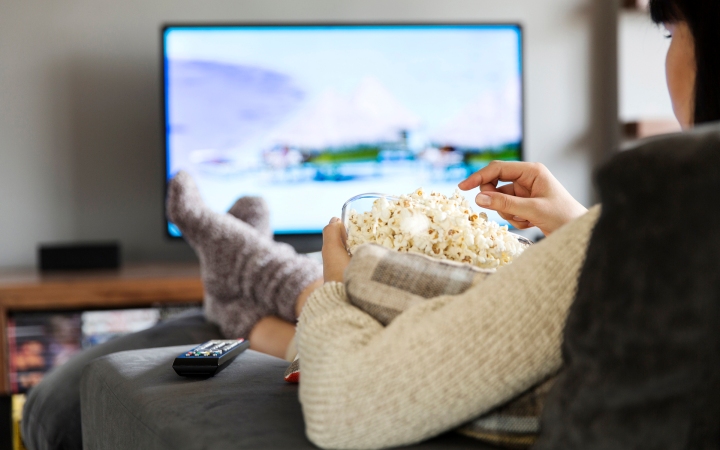 [Disclaimer: This article discusses mental health topics. I am not a mental health professional. I do not claim to be an expert. All my writing on mental health topics is based on my own education, my personal experience, researching the topics, reading studies, and fact-checking. I can only provide so much information though. I always advise that you seek out a therapist or psychologist for professional help.]

We at Love, Geeky Girl recently got a reader request to create a list of broadcast and cinema media that correctly portrays mental illnesses. As our resident psychology nerd, I jumped at the chance to cover this topic. Writing the article, I wanted to cover a variety of mental illnesses. I consume a lot of mental illness related content, so I already had some shows in mind. Sadly though, folks with mental illnesses have been either overlooked, inaccurately portrayed, or villainized in tv and movies for decades; therefore, the list is much shorter than it should be. Some psychiatric disorders, like schizophrenia and obsessive-compulsive disorder, were left out due to the lack of good representation. For others, though psychologists identify traits of the disorder within the character, the pathology is never identified or treated in the show.

1. The Perks of Being A Wallflower

In this realistic, heartwarming, painful coming-of-age movie, the main character has been in and out of an institution for his mental illnesses. Though no diagnosis is explicitly stated, Charlie has experienced serious trauma from his childhood. He dissociates from his memories and avoids talking about it. When he becomes triggered, he has flashbacks to his childhood sexual abuse. During his social interactions, he exhibits traits of depression and anxiety as well. His trauma and the possibility of PTSD better explain his symptoms though. Overall, the movie is a phenomenally accurate example of the way trauma affects survivors.

‘This Is Us’ shows anxiety and panic attacks to be the terrifying, overwhelming, debilitating experience they are. We see both Randall and his daughter, Tess, struggle through anxiety. Randall has been coping with anxiety since childhood, and he feels guilty for passing on his genetic disorder. When he falls into a terrible panic attack in adulthood, his brother takes action in a productive and meaningful way. The anxiety and panic disorder symptoms that Randall displays are more accurate than nearly any other show I’ve seen. Kevin, Randall’s brother, also accurately represents how a person might help a loved one through the experience.

I will be completely honest. I have never seen this television show; however, it showed up on every other list during my research.

The portrayal of PTSD in ‘Jessica Jones’ is so accurate that I, someone with complex PTSD, cannot watch the show for extended periods of time. It is physically painful for me to see Jessica isolate herself, live in a state of anger, not sleep, have flashbacks and nightmares, self-medicate, and experience anxiety and panic attacks. She doesn’t just get over her trauma. She is haunted by what Kilgrave did to her. At no point does she deny the horrible effects this is having on her psyche. She uses coping mechanisms and mantras from therapy to get through her worst PTSD episodes. There’s no question in my mind that ‘Jessica Jones’ is a realistic and accurate portrayal of PTSD

Dissociative identity Disorder is frequently shown as a violent and societally-dangerous disorder in tv and movies. People with DID are often shown as villains, murderers, and a threat. I cannot stress this enough: THIS IS NOT ACCURATE. Because of this, I went through the DID chat boards, scoured the DID YouTube channels/comments from systems with DID, and did as much research as I could to find a good example of the disorder. The movie ‘Frankie and Alice’ came up almost every place I looked as the only really great representation of DID in tv and movies. Frankie is the core of a DID system who finds herself struggling to understand her blank memories, dissociation, actions mentioned by others, and unusual items around her apartment. Through a series of events, she finds herself in a mental facility, getting treatment from a doctor who helps uncover and track her DID. He helps her learn about her alters Alice and Genius. Together, Dr. Oz and Frankie’s system work to uncover the trauma that led to the disorder’s development. The movie properly represents the disorder as developed from childhood trauma, difficult to cope with, containing amnesiac barriers between alters, and needing therapeutic intervention to help integration. The symptoms seen in Frankie, Alice, and Genius all are accurate to the disorder. I was happy to see DID represented in a positive, correct way.

Roxy in the tv show ‘Almost Family’ is a very good representation of the way addiction struggles affect both those with addiction and the people all around them. Throughout the season (only 1 so far), we see Roxy spiral. When she feels herself losing control, she leans more on prescription drugs to cope. She spends less time sober as stress increases. She pushes her loved ones, especially those who want her to get help, away. She begins showing up to work high or drunk, putting her young client at risk. Roxy clearly is in mental anguish. We see her go to desperate lengths, even stealing her friend’s prescription pad, to get a fix. Luckily, despite a lot of resistance, her family eventually helps get her into rehabilitation. Afterward, Roxy comes to terms with her addiction and works hard to stay sober.

*Note: As a whole, this show is morally and ethically gray at best. I am not endorsing it or condemning it. I think it has merit, but I also can see why some would dislike the show. Only towards the end of the first season do we see Dr. Bechley face any real condemnation and consequences for his actions. The only reason I am including it in the list is for the way they handle Roxy’s addiction problem.

Despite the show handling mental illnesses (e.g. eating disorders) poorly in the first few seasons, ‘Pretty Little Liars’ exemplifies PTSD in Season 6. Aria, Hanna, Emily, and Spencer all struggle to handle their traumatic experiences. Hanna can’t stand to talk about the trauma or be around anything that remotely reminds her of it. She pushes away Caleb and her mom, and she harbors serious anger. Aria tries to pretend to be okay, forcing herself to move on. But, she later describes having a breakdown on the train which throws her into a serious flashback, resulting in her crying and screaming in the corner of the train car. Emily tries to take things into her own hands by getting a gun. This is the only way she can feel safe during her emotional turmoil. (Folks with mental illness are more likely to hurt themselves than hurt others.) Spencer slips back into prescription drug abuse to numb the pain, flashbacks, and nightmares. While their PTSD isn’t explicitly discussed much, it is very clearly a good representation of how different people handle trauma.

Many different psychologists have identified Amy Dunne from ‘Gone Girl’ as a perfect example of Antisocial Personality Disorder (specifically, psychopathy) in women, a largely overlooked demographic in the media, and possibly Narcissistic Personality Disorder. This paper perfectly breaks down where the character aligns with textbook ASPD– ‘Gone Girl’: Exploring the Female Psychopath. There are also arguments to be made that there could be another comorbid Cluster B personality disorder. Psychiatrist, Dr. Paul Puri explains where the overlap occurs in this interview: A Psychiatrist Weighs In On Amy & Nick In ‘Gone Girl’. Either way, ‘Gone Girl’ has a very accurate portrayal of these mental health issues.

9. To Write Love On Her Arms

The movie ‘To Write Love On Her Arms’ is an extremely real movie. It’s based on the real story of Rachel Yohe. Her story inspired the To Write Love On Her Arms organization. The show put out the raw, ugly side of detox, withdrawal, addiction. It discusses the way Bipolar Depression interacts with those issues. Rachel is shown to be extremely flawed, struggling, in pain, and taking her sobriety one day at a time. She relapses. She falls back into cutting. She expresses her anger and aggression towards the man who raped her. But, she keeps fighting for herself. The movie’s painfully real and well-done. Be aware though, the movie can be extremely triggering if you’ve gone through any of these things.

I saved the best and my absolute favorite for last! ‘Crazy Ex-Girlfriend’ shows the mental health journey of Rebecca Nora Bunch. She moves to West Covina after developing an unhealthy obsession with Josh Chan. We watch her do irrational, negative things. We find out that she has a history of mental illness and suicide attempts. She experienced an unstable attachment to her parents. Her dad left at a young age. Throughout the seasons, she displays serious traits of Borderline Personality Disorder. She partakes in therapy with Dr. Akopian, struggling to get anywhere. Only in Season 3, after she hits rock bottom and attempts to overdose, does she get a correct diagnosis. She struggles to accept it, but we do see her attend therapy, group therapy, do workbooks, etc. We see real therapy techniques and coping mechanisms used. And we feel the hard emotions Rebecca goes through. This musical comedy handles mental health, mental illness, therapy, and BPD in the best way possible. I recommend everyone interested in mental health watch this show.

Those are the 10 shows that best represent mental illness. Each one does a positive thing in destigmatizing the issues. It makes others feel less alone. And, I know how much mental illness can create isolation. Feeling like you have a community and are seen by society can make a world’s difference. Hopefully, we will see an increase in the number of good shows with mental illness representation as society grows our understanding on the topic.

I hope you enjoyed the article. What movies and tv shows do you think properly depict mental illness? Are there any you think I missed? Also, do you disagree with my list? Let’s start a conversation in the comments section!